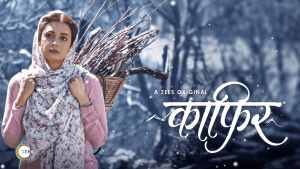 Kaafir is a 2019 Indian web television series directed by Sonam Nair. Written by Bhavani Iyer, the series follows Kainaaz Akhtar, a woman from Pakistan occupied Kashmir who winds up on the Indian side of the Line-of-Control, and is held prisoner under the suspicion of being a militant.