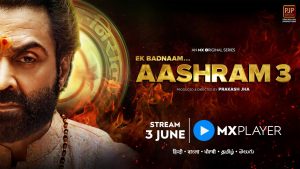 “Ashram” crime drama web series under the direction of Prakash Jha is considered to be the best MX Player original series. Both the seasons of Aashram have hit the right chord leaving people asking when “Ashram 3 will come”? The producers have confirmed that they are going ahead to renew it for a third season. It has the right plot, chart popping popularity, cast, and it is an original MX Player series.