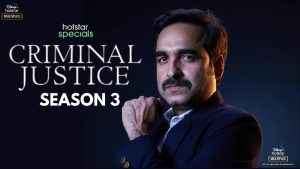 Criminal Justice Adhura Sach is an Indian web series directed by Rohan Sippy. It stars Shweta Basu Prasad and Pankaj Tripathi in the lead roles. The series is made under the banner of BBC Studio in association of Applause Entertainment.