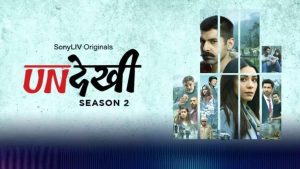 Undekhi (English: Unseen) is an Indian Hindi-language crime thriller web television series which premiered on Sony Liv It is produced by Applause Entertainment & Edgestorm Ventures. The series is based on true incidents and depicts the two aspects of the society – the power-drunk influential people who think they can get away with anything and the oppressed, subjected to years of torture, who finally decide to bring themselves to justice.