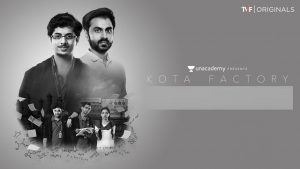 Kota Factory is an Indian web series directed by Raghav Subbu for The Viral Fever.The series simultaneously premiered on TVFPlay and YouTube on 16 April 2019. It is also the first black and white web series in India.The show follows the life of 16-year-old Vaibhav who moves to Kota from Itarsi.