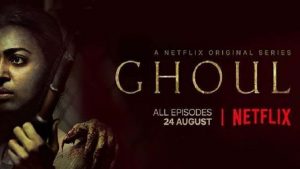 When a new prisoner arrives at a military detention center exhibiting eerie behavior, young interrogator Nida Rahim searches for the truth. Her quest becomes a battle for survival when the prisoner, sect leader Ali Saeed, turns the tables on Nida and the other interrogators, exposing their most shameful secrets. Nida ultimately discovers a ghoul inhabiting Saeed and — after telling her colleagues about it — learns the alarming truth about what its presence reveals.