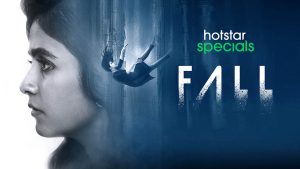 Fall is a 2022 Indian-Tamil-language Thriller Drama streaming television web series, which is an official remake of an Canadian series Vertige. The series was directed by Siddharth Ramaswamy for Disney+ Hotstar under the banner of Banijay Asia and Circle Box Entertainment. The principal characters of the series include Anjali, Santhosh Prathap, Sastika Rajendran, Poornima Bhagyaraj, Namita Krishnamurthy, Sonia Agarwal and S. P. Charan. The series is about, a young women who has been in a coma since falling off the roof of the family business three months earlier.