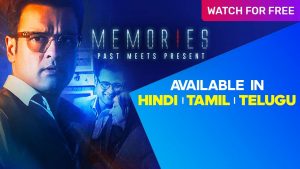 Siddharth is a well-known news anchor of a popular news channel called “India Now”. But along with his being a capable and known anchor, he was also blessed with an unusual superpower. He could touch any dead body and access that dead person’s memories, everything about that person’s life, good or bad memories, wishes, experiences, desires, secrets, he could see it all like a movie. This gift also allowed him to help the police solve quite a few cases where the secret clues were hidden in the memories of the dead bodies.