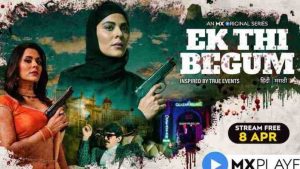 Set in the age-old city of Bombay in the decade of 1980s, this brilliantly written web show is a crime thriller series directed and written by Sachin Darekar. The series stars Anuja Sathe in the lead role along with a stellar star cast including Ankit Mohan, Abhijeet Chavan, Santosh Juvekar, Vijay Nikam, Chinmay Deepak Mandlekar, Rajendra Shisatkar, and Reshan P.S. in various pivotal roles. While many Hindi movies and shows have come out with gangster stories from Bombay, Ek Thi Begum sets itself apart by having a female character at the center and taking inspiration from various real events. Watch Ek Thi Begum web show all episodes online in full HD and enjoy the thrill as Anuja Sathe ventures into the world of crime. The underworld don meets his biggest challenge yet, a wife’s wrath! Ashraf is a simple Bombay woman who is married to an underworld gangster Zaheer. Zaheer works for an international don who resides in Dubai but some issues arise between Zaheer and his boss and he decides to quit the underworld with a statement and creates hurdles for the don’s shipment and does not let it pass into the city of dreams. Infuriated and enraged, he gets Zaheer killed and Ashraf loses her unborn child in grief. With nothing else left to lose and driven by her desire to have her revenge, Ashraf decides to take on the don and his entire gang. Will Ashraf be able to bring down the mafia boss? Stream Ek Thi Begum web series video episodes online on MX Player for free and be enthralled by the story of pure grit and determination.